Autonomous microswimmers are of enormous interest not only from an academic point of view, but also for future practical applications ranging from miniaturized motors to nanomedecine. A key step for the generation of such objects is their dissymmetric modification with a catalyst particle that activates the chemical conversion of a fuel molecule, leading ultimately to the propulsion of the object. So far it has been quite difficult to synthesize such dissymmetric objects and most approaches are based on using interfaces to break the symmetry. We demonstrate here that a very simple approach based on bipolar electrochemistry allows the bulk generation of carbon microtubes (CMTs) that are modified selectively at one end with a Pt cluster. The presence of this metal cluster allows the catalytic decomposition of hydrogen peroxide and the resulting oxygen bubbles trigger the propulsion of the object. The type of motion can be switched from linear to circular as a function of the exact position of the Pt cluster. 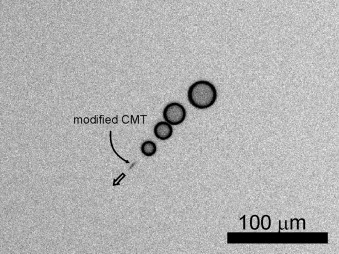 Ancla C., Lapeyre V., Gosse I., Catargi B., Ravaine V.Langmuir 2011, 27, 12693-12701 We report on the synthesis of various glucose-responsive microgels based on N-alkylacrylamide derivatives and...
Miniaturisation, la Base des Capteurs de Demain
01 September 2011

Loget G., Kuhn A.Anal. Bioanal. Chem.2011, 400, 1691-1704.Bipolar electrochemistry is a technique with a rather young history in the field of analytical chemistry. Being based on the...
Fast and Easy Enzyme Immobilization by Photoinitiated Polymerization for Efficient Bioelectrochemical Devices
15 March 2011