We report here the electrochemical characterization of eight synthetic DNA intercalators based on the 4H-pyrido[4,3,2-kl]acridin-4-one structure. We found that the electrochemical behavior of these redox active drugs is strongly influenced by the nature of the solvent. A single two-electron reduction is observed in an aqueous phosphate buffer (PB) whereas two successive one-electron reductions are observed in aprotic solution (acetonitrile). The influence of the molecular structure on the potential values is addressed along with a comparison between the DNA binding constant (KDNA) and the cytotoxic activity against HT29 cells (IC50). For typical DNA intercalators, one could expect that toxicity will be roughly proportional to the DNA binding constant. Yet, a structure/activity comparison solely based on the DNA affinity was not conclusive. In contrast, a direct relationship was evidenced for the first time between the decimal logarithm of the in vitro bioactivity and the reduction potential of pyridoacridones recorded in PB at pH 7.0. Moreover, most of the bio/electrochemical relationships previously described for quinone-based drugs were reported with electrochemical characterization in aprotic solvents (typically acetonitrile, dimethylformamide or dimethylsulfoxide). But aqueous solution electrochemistry is definitely the most bio-relevant because the redox mechanism of quinone or iminoquinone reduction directly depends on the protic nature of the solvent. 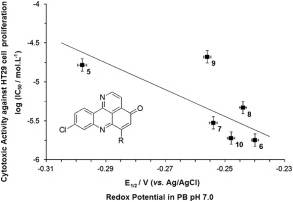 Lalo H., Bon Saint-Côme Y., Plano B., Etienne M., Walcarius E., Kuhn A.,Langmuir 2012, 28, 2323-2326. The elaboration of an original composite bimetallic macroporous electrode containing a...
The Fraction of Alpha-linolenic Acid present in the sn-2 position of Structured Triacylglycerols decreases in Lymph Chylomicrons and Plasma Triacylglycerols during the Course of Lipid Absorption in Rats
30 November 2011