We report on the successful modification of macroporous microelectrodes with the electrocatalyst Prussian Blue, resulting in improved hydrogen peroxide sensing. When the pores of the electrode surface are completely filled with the electrocatalyst the resulting sensor shows a behavior similar to the one obtained for a non-porous microelectrode. However, significantly improved analytical performance is obtained when the porous structure is only partly filled with the catalyst, allowing diffusional access of the analyte to the inside of the pores. The resulting sensor is characterized by both improved operational stability and record sensitivity of 8.8 ± 0.7 A.m− 1.cm− 2 for H2O2 detection. 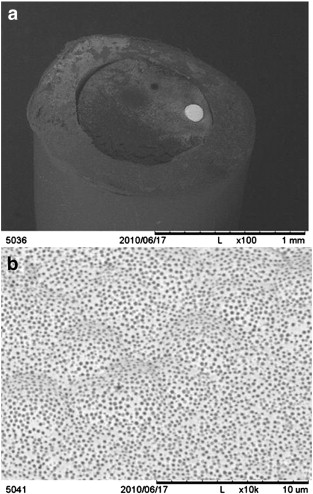 Fattah Z., Garrigue P., Goudeau B., Lapeyre V., Kuhn A., Bouffier L.,Electrophoresis 2013, 34, 1985-1990. The site selective electrodeposition of silver metal onto a conducting object such...
Development of Electrochemical Microsensors for the Monitoring of Mitochondrial Activities
18 June 2013

Shu Q., Adam C., Sojic N., Schmittel M.,Analyst 2013, 138, 4500-4504. An electrochemiluminescent sensing scheme is presented for remote detection of Hg2+ through an ITO-coated nanostructured...
Photochemical Crosslinking of Hyaluronic Acid confined in Nanoemulsions: towards Nanogels with a Controlled Structure
07 May 2013

Mokrushina A. V., Heim M., Karyakina E. E., Kuhn A., Karyakin A. A.,Electrochem. Comm. 2013, 29, 78-80. We report on the successful modification of macroporous microelectrodes with the...
Oxygen Plasma Treatment Of Platinized Ultramicroelectrodes Increases Sensitivity For Hydrogen Peroxide Detection On Mitochondria
24 January 2013

Bouffier L., Kuhn A., Nanoscale 2013, 5, 1305-1309. The control of motion of small objects is an emerging research area. Their design strongly depends on the strategy chosen to trigger the...
Effect of Novel Antibacterial Gallium-Carboxymethyl Cellulose on Pseudomonas Aeruginosa
30 October 2012