We present solid-state, polymer-based, light-emitting electrochemical cells incorporating bipolar electrodes (BPEs) positioned between the driving electrodes. The dominant processes in these planar electrochemical cells are in situ electrochemical p and n doping of the luminescent conjugated polymer when a sufficient voltage bias is applied between the feeder anode and cathode. The inclusion of floating BPEs causes additional doping at the extremities of the BPE, which has been visualized through in situ fluorescence imaging. We investigate how the applied voltage bias and the BPE size affect electrochemical doping from the BPE. We observe an interesting delay in the appearance of doping from the BPE if the applied voltage bias was initially insufficient. Doping eventually occurs when the potential difference across the BPE/polymer interface becomes sufficient, as doping from the driving electrodes propagates. The inclusion of BPEs can lead to more efficient polymer light-emitting and photovoltaic cells when a large number of active junctions are formed. 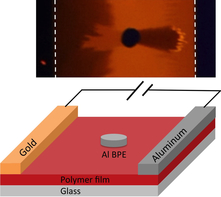