Nanoelectrode arrays (NEAs) are increasingly applied for a variety of electroanalytical applications; however, very few studies dealt with the use of NEAs as an electrochemical generator of electrogenerated chemiluminescence (ECL). In the present study, arrays of nanodisc and nanoband electrodes with different dimensions and inter-electrode distances were fabricated by e-beam lithography on a polycarbonate layer deposited on boron-doped diamond (BDD) substrates. In particular, NEAs with 16 different geometries were fabricated on the same BDD sample substrate obtaining a multiple nanoelectrode and ultramicroelectrode array platform (MNEAP). After electrochemical and morphological characterization, the MNEAP was used to capture simultaneously with a single image the characteristic behaviour of ECL emission from all the 16 arrays. Experiments were performed using Ru(bpy)32+ as the ECL luminophore and tri-n-propylamine (TPrA) as the co-reactant. With a relatively limited number of experiments, such an imaging procedure allowed to study the role that geometrical and mechanistic parameters play on ECL generation at NEAs. In particular, at high concentrations of TPrA, well-separated individual ECL spots or bands revealed an ECL signal which forms a pattern matching the nanofabricated structure. The analysis of the imaging data indicated that the thickness of the ECL-emitting zone at each nanoelectrode scales inversely with the co-reactant concentration, while significantly stronger ECL signals were detected for NEAs operating under overlap conditions. 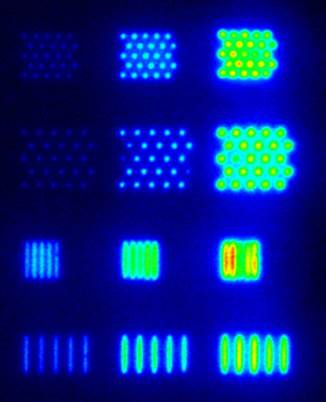