A series of symmetric fluorescent dyes built from a spirofluorene core, bearing electroactive end-groups and having different conjugated linkers were prepared in view of their use as building blocks for the preparation of electrochemiluminescent (ECL) dyes and nanoparticles. Their electrochemical, spectroelectrochemical and ECL properties were first investigated in solution and structure/activity relationships were derived. The electrochemical and ECL properties show drastic variation that could be tuned contingent on the nature of the π-conjugated system, end-groups and of the core. Among the series, the highly fluorescent dye based on a spirofluorene core and triphenylamine end-groups connected via thiophene moieties (1) shows the most promising and intriguing properties. 1 is reversibly oxidized in three well-separated steps and a very intense and large ECL signal is generated. Its ECL efficiency is 4.5-time greater than that of the reference compound, Ru(bpy)32+.This remarkably high efficiency is due to the very good stability of the higher oxidized states and it makes 1 a very bright organic ECL luminophore. In addition, thanks to its molecular structure, this dye retains fluorescence when nano-precipitated in water, leading to Fluorescent Organic Nanoparticles (FONs). Redox behaviour of these FONs shows oxidation waves consistent with the initial molecular species. Finally, ECL from FONs made of 1 was recorded in water and strong ECL nano-emitters are thus obtained. 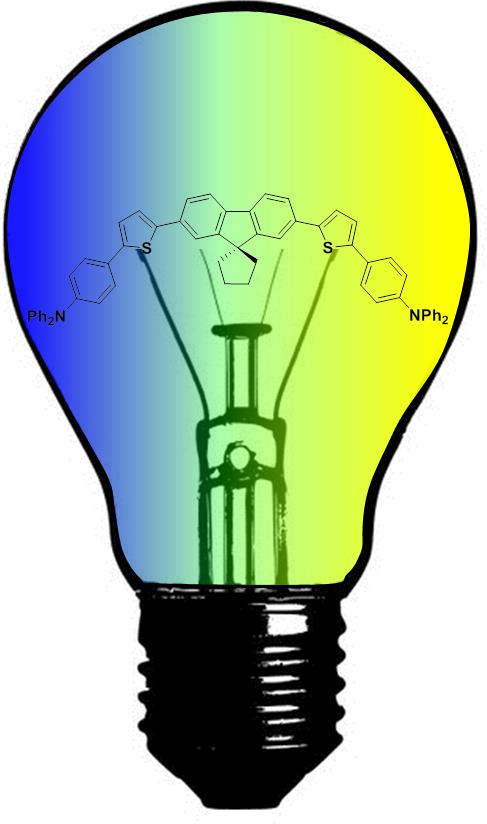