Multiplexed bioluminescence resonance energy transfer (BRET) assays were developed tomonitor the activation of several functional transient receptor potential (TRP) channels in live cells and in real time.We probed both TRPV1 intramolecular rearrangements and its interaction with Calmodulin (CaM) under activation by chemical agonists and temperature. Our BRET study also confirmed that: (1) capsaicin and heat promoted distinct transitions, independently coupled to channel gating, and that (2) TRPV1 and Ca2+-bound CaM but not Ca2+-free CaM were preassociated in resting live cells, while capsaicin activation induced both the formation of more TRPV1/CaM complexes and conformational changes. The BRET assay, based on the interaction with Calmodulin, was successfully extended to TRPV3 and TRPV4 channels. We therefore developed a full-spectral three-color BRET assay for analyzing the specific activation of each of the three TRPV channels in a single sample. Such key improvement in BRET measurement paves the way for the simultaneous monitoring of independent biological pathways in live cells. 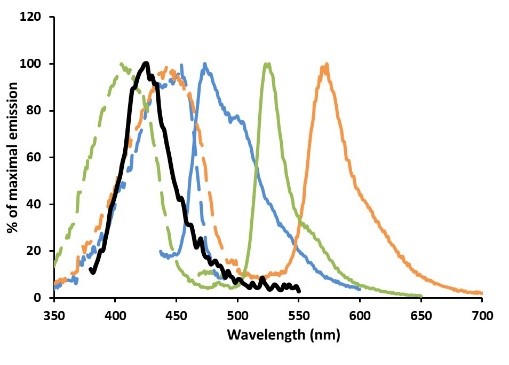