Deposition of metals on TiO2 semiconductor particles (M-TiO2) results in hybrid Janus objects combining the interesting properties of both materials. One of the techniques that have been proposed to generate Janus particles is bipolar electrochemistry (BPE). The concept can be applied in a straightforward way for the site selective modification of conducting particles, but is much less obvious to use for semiconductors. In this work we report the bulk synthesis of anisotropic M-TiO2 particles based on the synergy of BPE and photochemistry, allowing to overcome intrinsic limitations when they are used separately. When applying electric fields during irradiation, electrons and holes can be efficiently separated, thus breaking the symmetry of particles by modifying them selectively and in a wireless way on one side with either gold or platinum. Such hybrid materials are an important first step towards high performance designer catalyst particles for example for photosplitting of water. 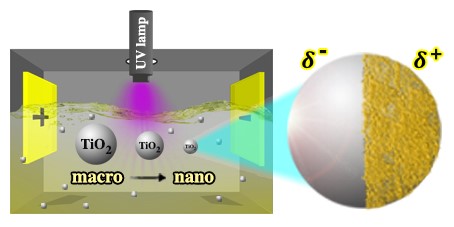