Bipolar electrochemistry can be used in different ways to induce motion of an object, for example by generating gas bubbles in an asymmetric way or by a wireless self-regeneration mechanism due to the intrinsic symmetry breaking of this concept. Here a complementary approach is explored on the basis of conducting polymer objects addressed in solution by an electric field. The presence of the latter results in a differential polarization of the polymer, thus enabling its oxidation at one extremity and its reduction at the opposite side. This triggers different degrees of swelling and shrinking, leading to important deformations of the object. Combined with an additional asymmetry in the polymer surface morphology, a periodic switching of the electric field orientation allows exploiting these deformations to induce directed crawling motion. This first example of a wireless biomimetic crawler based on conducting polymers opens interesting long-term perspectives in several areas such as for example wireless valves, pumps and (micro)robotics. 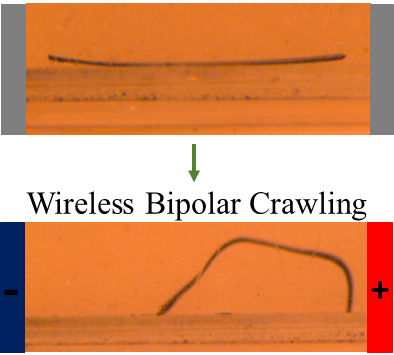