The understanding of plasma-liquid interactions is of major importance, not only in physical chemistry, chemical engineering and polymer science, but in biomedicine as well as to better control the biological processes induced on/in biological samples by Cold Atmospheric Plasmas (CAPs). Moreover, plasma-air interactions have to be particularly considered since these CAPs propagate in the ambient air. Herein, we developed a helium-based CAP setup equipped with a shielding-gas device, which allows the control of plasma-air interactions. Thanks to this device, we obtained specific diffuse CAPs, with the ability to propagate along several centimetres in the ambient air at atmospheric pressure. Optical Emission Spectroscopy (OES) measurements were performed on these CAPs during their interaction with a liquid medium (Phosphate-Buffered Saline PBS 10 mM, pH 7.4) giving valuable information about the induced chemistry as a function of the shielding gas composition (variable O2/(O2+N2) ratio). Several excited species were detected including N2+(First Negative System, FNS), N2(Second Positive System, SPS) and HO· radical. The ratios between nitrogen/oxygen excited species strongly depend on the O2/(O2+N2) ratio. The liquid chemistry developed after CAP treatment was investigated by combining electrochemical and UV-visible absorption spectroscopy methods. We detected and quantified stable oxygen and nitrogen species (H2O2, NO2-, NO3-) along with Reactive Nitrogen Species (RNS) such as the peroxynitrite anion ONOO-. It appears that the RNS/ROS (Reactive Oxygen Species) ratio in the treated liquid depends also on the shielding gas composition. Eventually, the composition of the surrounding environment of CAPs seems to be crucial for the induced plasma chemistry and consequently, for the liquid chemistry. All these results demonstrate clearly that for physical, chemical and biomedical applications, which are usually achieved in ambient air environments, it is necessary to realize an effective control of plasma-air interactions. 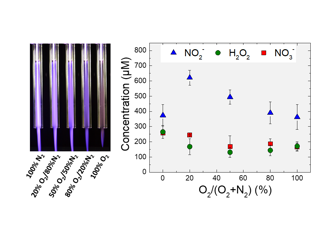