A simple route to deliver on demand hydrosoluble molecules such as peptides, packaged in biocompatible and biodegradable microgels, is presented. Hyaluronic acid hydrogel particles with a controlled structure are prepared using a microfluidic approach. Their porosity and their rigidity can be tuned by changing the crosslinking density. These negatively-charged polyelectrolytes interact strongly with positively charged linear peptides such as poly-L-lysine (PLL). Their interactions induce microgel deswelling and inhibit microgel enzymatic degradability by hyaluronidase. While small PLL penetrate the whole volume of themicrogel, PLL larger than the mesh size of the network remain confined at its periphery. They make a complexed layer with reduced pore size, which insulates the microgel inner core from the outer medium. Consequently, enzymatic degradation of the matrix is fully inhibited and non-affinity hydrophilic species can be trapped in the core. Indeed, negatively charged or small neutral peptides, without interactions with the network,usually diffuse freely across the network. By simple addition of large PLL, they are packaged in the core and can be released on demand, upon introduction of an enzyme that degrades selectively the capping agent. Single polyelectrolyte layer appears as a simple generic method to coat hydrogel-based materials of various scales for encapsulation and controlled delivery of hydrosoluble molecules. 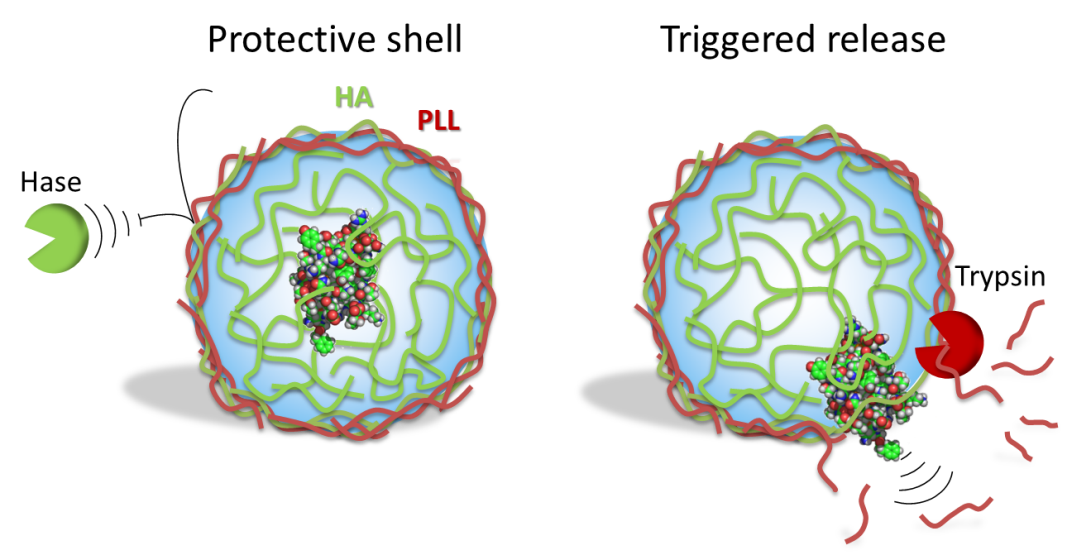