The design of nanocarriers containing hydrophobic and hydrophilic compounds represents a powerful tool for cocktail delivery. Water-in-oil-in-water emulsions constitute an attractive approach as they offer dual encapsulation and provide a template for the constitution of a capsule. A limitation in the preparation of nano double emulsions is their instability resulting from high curvature radii. In this work, silica nanocapsules (NCs) stable over several months were synthesized. This was achieved by exploiting a double emulsion in which the oil phase is constituted by a combination of oils presenting several volatilities. The decrease of oil droplets size by evaporation favored the deposition of a silica layer at the nanoscale interface. The release of the payload obtained by drying the capsules was investigated by fluorescence spectroscopy. Understanding the interactions between proteins and nanocapsules is a fundamental point for many biological applications. Nanocapsules were exposed to two model proteins, which were Bovine Serum Albumin (BSA) and Lysozyme (Ly). These proteins, presenting differences in charges and size, showed distinctive arrangements onto the nanocapsules. Moreover, we have studied changes in α-helix and β-sheet content, which divulged the interactions between the proteins and the nanocapsules. 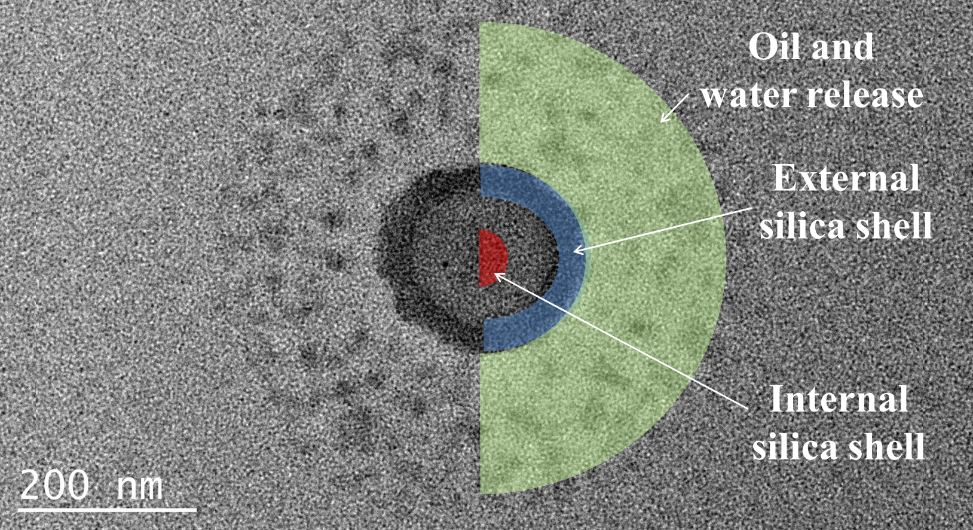