Electrochemistry and fluorescence microscopy are two complementary transduction techniques that offer synergetic advantages when employed simultaneously. In particular, it is possible to study electrochemical reactivity by recording in situ fluorescence images under electrochemical control. The corresponding data are time-resolved with a quantitative electrochemical signal combined with spatial information provided by fluorescence microscopy. This topic is illustrated with various fluorogenic systems with a special focus on confocal imaging allowing varying of the longitudinal z distance when collecting planar (x–y) data. Recent and future perspectives toward super-resolution microscopy are also discussed.

We study in real time the optical response of individual plasmonic nanoparticles on a mirror, utilised as electrodes in an electrochemical cell when a voltage is applied. In this geometry, Au nanoparticles are separated from a bulk Au film by an ultrathin molecular spacer. The nanoscale plasmonic hotspot underneath the nanoparticles locally reveals the modified charge on the Au surface and changes in the polarizability of the molecular spacer. Dark field and Raman spectroscopy performed on the same nanoparticle, show our ability to exploit isolated plasmonic junctions to track the dynamics of nano-electrochemistry. Enhancements in Raman emission and blue-shifts at negative potential show the ability to shift electrons within the gap molecules.

Bioelectrochemical Systems (BESs) are innovative and sustainable devices. They combine biological and electrochemical processes to engineer sensors, treat wastewater and/or produce electricity, fuel or high-value chemicals. In BESs, scientists have managed to incorporate biological catalysts, i.e. enzymes and/or microorganisms, and make them work in advanced electrochemical cells. BESs operate under mild conditions — at close to ambient temperature and pressure and at circumneutral pH — and represent a sustainable alternative to precious metal-based systems. Incorporating biological catalysts into devices while maintaining their activity and achieving electrical communication with electrode surfaces is a critical challenge when trying to advance the field of BESs.

From implantable enzymatic biosensors to microbial electrosynthesis, and from laboratory-scale systems and fundamental studies to marketed devices, this book provides a comprehensive overview of recent advances related to functional electrodes for BESs. Suitable for researchers and graduate students of chemistry, biochemistry, materials science and environmental science and technology.

We describe a method to confine electrochemiluminescence (ECL) at the oil-water interface of emulsion droplets which are stabilized by luminophore-grafted microgels. These hydrogel nanoparticles incorporating covalently-bound  as the luminophore are irreversibly adsorbed at the interface of micrometric oil droplets dispersed in a continuous aqueous phase. We study the electrochemical and ECL properties of this multiscale system, composed of a collection of droplets in close contact in the presence of two types of model coreactants. ECL emission is observed upon oxidation of the coreactant and of the luminophore. ECL imaging confirms that light is emitted at the surface of oil droplets. Interestingly, light emission is observed more than 100-µm far from the electrode. It is possibly due to the interconnection between redox-active microgels making an entangled 2D-network at the dodecane/water interface and/or to some optical effects related to the light propagation and refraction at the different interfaces in this multiphasic system. Confining ECL in such an inhomogeneous medium should find promising applications in the study of compartmentalized systems, interfacial phenomena, sensors and analysis of single oil droplets.

C. Bodin,  E. Mourad,  D. Zigah,  S. Le Vot,  S. A Freunberger,  F. Favier, O. Fontaine
Faraday Discuss., 2017,DOI: 10.1039/C7FD00174F
Nowadays, commercial supercapacitors are based on purely capacitive storage and porous carbons are used as electrodes. Unfortunately their energy density is limited, so that many study investigated new materials that could improve the capacitance of the device. This new type of electrodes (e.g. RuO2, MnO2…) involves different mechanisms for energy storage (energy stored at the solid state in the material). In this latter case, redox reactions (Faradaic), that are slower than adsorption process (capacitive), occurs, explaining why such devices are called pseudo-capacitors. This is a real breakthrough to their development since, using this approach, capacity improvement inevitably involves important loss of power. A contrary, at the liquid state, even if Faradaic, redox reactions occur faster due to favourable environment. To design new devices allowing liquid dynamics with improved specific capacitance is very challenging. In this context, this paper presents a new approach to increase the specific capacitance, based on biredox ionic liquids, where redox species are part of the electrolyte, in contrast with classical pseudocapacitors proposed up to now. Anions and cations are functionalized with anthraquinone (AQ) and 2,2,6,6-tetramethylpiperidinyl-1-oxyl (TEMPO) moieties, respectively. Glassy carbon, carbon-onion, and commercial activated carbon electrodes that exhibit different double layer structures and thus different diffusion process (dynamics) were used to study electrochemical response of biredox ionic liquids simultaneously at the positive and the negative electrodes. 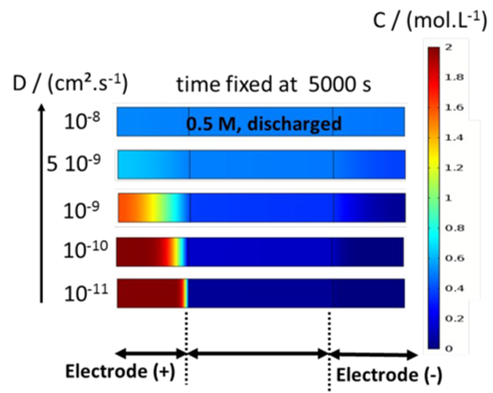