Polymer microgels have received considerable attention due to their great potential in the biomedical field as drug delivery systems. Hyaluronic acid (HA) is a naturally occurring glycosaminoglycan composed of N-acetyl-d-glucosamine and d-glucuronic acid. This polymer is biodegradable, nontoxic, and can be chemically modified. In this work, a co-flow microfluidic strategy for the preparation of biodegradable HA microgels encapsulating hydrophobic drugs is presented. The approach relies on: (i) generation of a primary oil-in-water (O/W) nanoemulsion by the ultrasonication method, (ii) formation of a double oil-in-water-in-oil emulsion (O/W/O) using microfluidics, and (iii) cross-linking of microgels by photopolymerization of HA precursors modified with methacrylate groups (HA-MA) present in the aqueous phase of the droplets. The procedure is used for the encapsulation and controlled release of progesterone. Degradability and encapsulation/release studies in PBS buffer at 37 °C in presence of different concentrations of hyaluronidase are performed. It is demonstrated that enzymatic degradation can be used to trigger the release of progesterone from microgels. This method provides precise control of the release system and can be applied for the encapsulation and controlled release of different types of hydrophobic drugs. 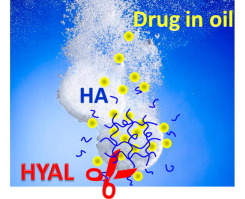 A bipolar electrode is quite unconventional as it behaves simultaneously as an anode and a cathode in contrast to a classic electrochemical setup where the electron-transfer reactions are promoted on two different electrodes. The driving force is the polarization potential established between the solution and the bipolar electrode which allows a wireless electrochemical addressing. In the past decade or so, bipolar electrochemistry (BPE) has encountered a remarkable renewal of interest with extraordinary potentialities ranging from materials science to analytical chemistry. For practical reasons, BPE experiments are very often performed in home-made electrochemical cells comprising tubes or capillaries. This review is focussed on specific applications based on such types of experimental set-ups, from the macroscale where the tube acts only as an ordinary container down to the microscale where specific properties of the capillary come also into play. 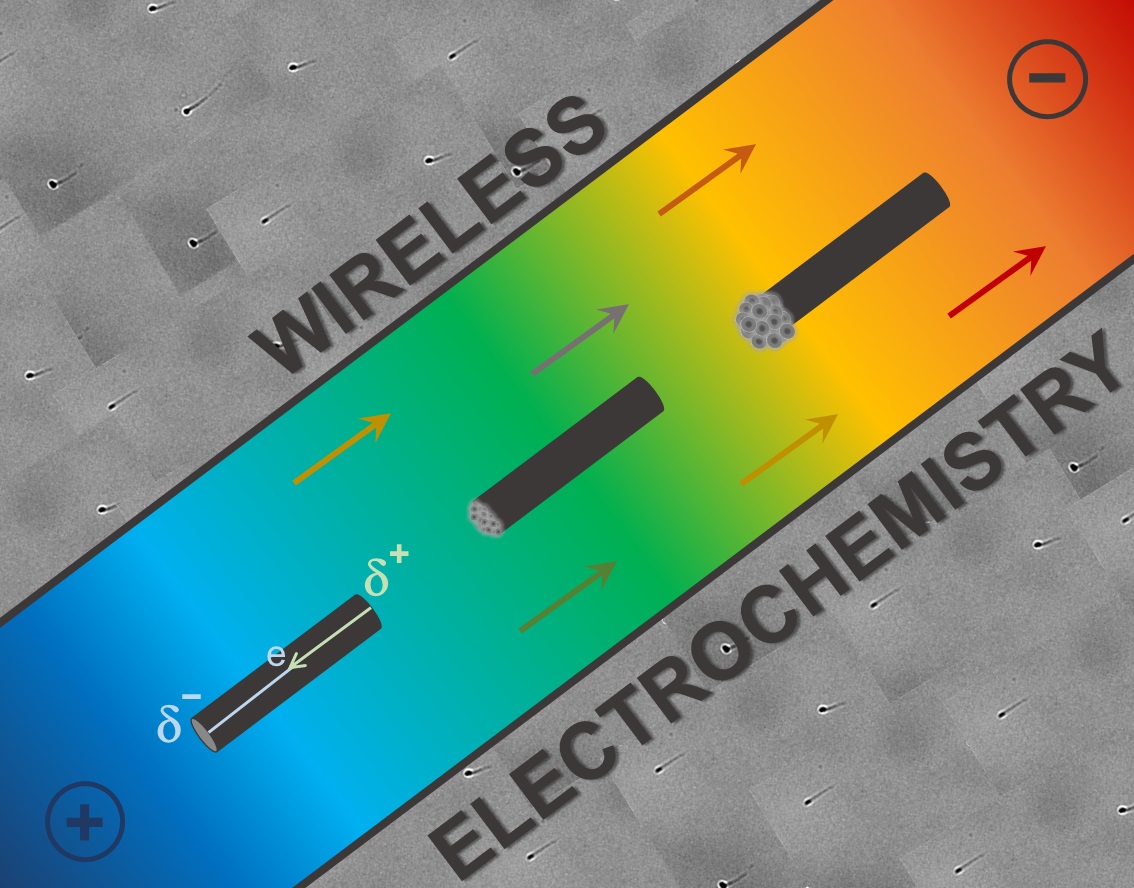 Here, we describe a new aspect of multicolor potential-resolved electrochemiluminescence (ECL) based on bipolar electrochemistry (BPE). BPE involves a potential gradient established along a polarized conducting object which thus acts as a bipolar electrode (BE). The resulting driving forces can induce electron-transfer reactions, necessary for processes such as ECL occurring at different longitudinal locations along the same BE. In this work, we exploit the entire spatial domain where anodic polarization occurs to demonstrate for the first time how the potential gradient along a BE may be used to simultaneously resolve the emissions of ECL-active luminophores with differing oxidation potentials. The control of both size and position of the ECL-emitting domains was achieved by tuning the applied electric field. Multicolor light-emission was analyzed in detail to demonstrate spatial and spectral resolution of a solution containing different emitters. 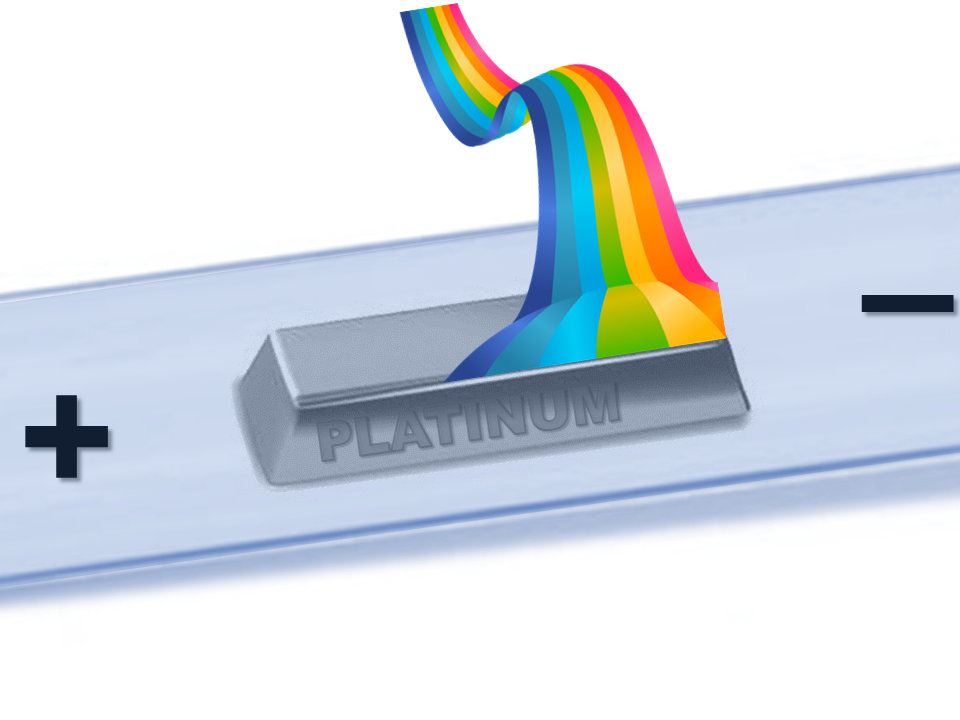 Nanostructured artificial receptor materials with unprecedented hierarchical structure for determination of human serum albumin (HSA) are designed and fabricated. For that purpose a new hierarchical template is prepared. This template allowed for simultaneous structural control of the deposited molecularly imprinted polymer (MIP) film on three length scales. A colloidal crystal templating with optimized electrochemical polymerization of 2,3â€²-bithiophene enables deposition of an MIP film in the form of an inverse opal. Thickness of the deposited polymer film is precisely controlled with the number of current oscillations during potentiostatic deposition of the imprinted poly(2,3â€²-bithiophene) film. Prior immobilization of HSA on the colloidal crystal allows formation of molecularly imprinted cavities exclusively on the internal surface of the pores. Furthermore, all binding sites are located on the surface of the imprinted cavities at locations corresponding to positions of functional groups present on the surface of HSA molecules due to prior derivatization of HSA molecules with appropriate functional monomers. This synergistic strategy results in a material with superior recognition performance. Integration of the MIP film as a recognition unit with a sensitive extended-gate field-effect transistor (EG-FET) transducer leads to highly selective HSA determination in the femtomolar concentration range.

First Co(III) complexes with (1,3-selenazol-2-yl)hydrazones as an unexplored class of ligands were prepared and characterized by NMR spectroscopy and X-ray diffraction analysis. Novel ligands act as NNN tridentate chelators forming octahedral Co(III) complexes. The impact of structural changes on ligands' periphery as well as isosteric replacement of sulphur with selenium on electrochemical, and electronic absorption features of complexes are explored. To support the experimental data, density functional theory (DFT) calculations were also conducted. Theoretical NMR chemical shifts, the relative energies and natural bond orbital (NBO) analysis are calculated within the DFT approach, while the singlet excited state energies and HOMO-LUMO energy gap were calculated with time-dependent density functional theory (TD-DFT).  The electrophilic fâ€“ and nucleophilic f+ Fukui functions are well adapted to ï¬nd the electrophile and nucleophile centres in the molecules. Both, (1,3-selenazol-2-yl)- and (1,3-thiazol-2-yl)hydrazone Co(III) complexes showed potent antimicrobial and antioxidant activity. Significant difference among them was a smaller cytotoxicity of selenium compounds.