Bipolar electrochemistry has been shown to enable and control various kinds of propulsion of non‑wired conducting objects: translation, rotation, and levitation. There is a very rapid development in the field of controlled motion combined with other functionalities. Here, we integrate two different concepts in one system to generate wireless electrochemical motion of a specifically designed rotor and track its polarization simultaneously by electrochemical light emission. Locally produced hydrogen bubbles at the cathodic pole of the bipolar rotor are the driving force of the motion, whereas [Ru(bpy)3]Cl2 and tripropylamine react at the anodic extremity, thus generating an electrochemiluminescence signal with an intensity directly correlated with the orientation of the rotor arms. This allows in a straightforward way the qualitative visualization of the changing interfacial potential differences during rotation, and shows for the first time that light emission can be coupled to autonomously rotating bipolar electrodes. 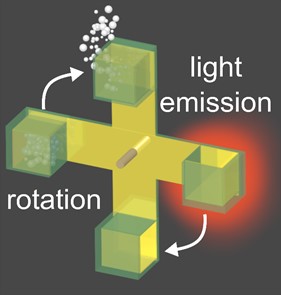