In modern chemistry, chiral (electro)catalysis is a powerful strategy to produce enantiomerically pure compounds (EPC). However, it still struggles with uncontrollable stereochemistry due to side reactions, eventually producing a racemic mixture. To overcome this important challenge, a well-controlled design of chiral catalyst materials is mandatory to produce enantiomers with acceptable purity. In this context, we propose the synergetic combination of two strategies, namely the elaboration of mesoporous Pt films, imprinted with chiral recognition sites, together with the spatially controlled formation of a self-assembled monolayer. Chiral imprinted metals have been previously suggested as electrode materials for enantioselective recognition, separation and synthesis. However, the outermost surface of such electrodes is lacking chiral information and thus leads to unspecific reactions. Functionalising selectively this part of the electrode with a monolayer of organosulfur ligands allows an almost total suppression of undesired side reactions and thus leads to a boost of enantiomeric excess to values of over 90% when using these surfaces in the frame of enantioselective electrosynthesis. In addition, this strategy also decreases the total reaction time by one order of magnitude. The study therefore opens up promising perspectives for the development of heterogeneous enantioselective electrocatalysis strategies. 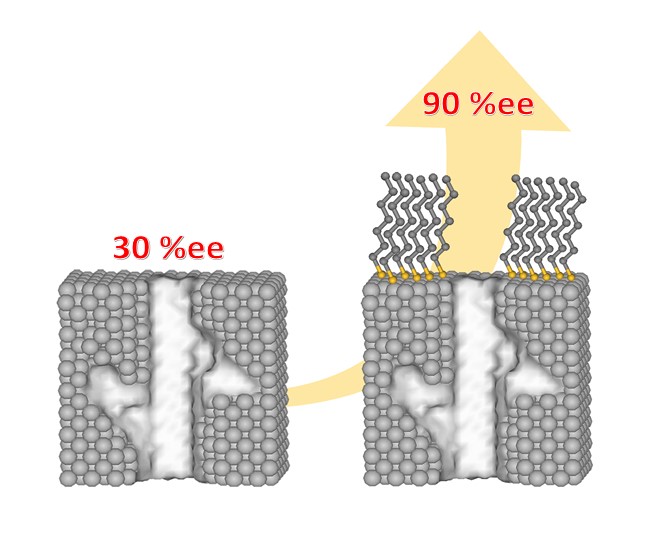